Laurence Monnais is the author of the book “Vaccinations. Le mythe du refus,” currently available only in French. Her book, intended for non-historians, public health experts, and health care professionals, examines the connection people tend to make between the refusal against vaccines and the “return” of certain diseases that we had thought to be eradicated. This article, prepared by Laurence Monnais for CANVax in Brief, provides a short summary of the arguments in the book. 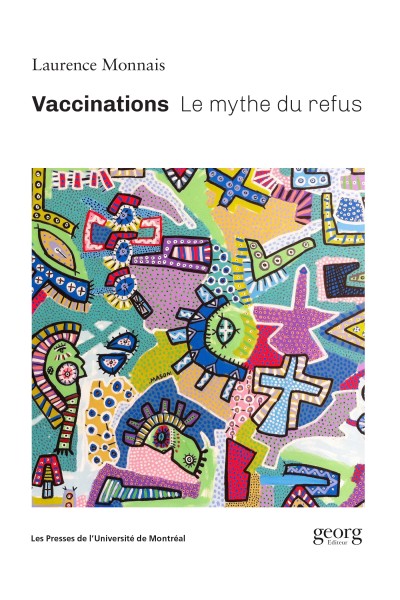 Quebec experienced its last important measles epidemic thirty years ago. 10,373 cases of measles, including 5 deaths, were officially declared in a span of nine months. In reality, there may have been up to 40,000 measles cases. My latest book, Vaccinations. Le mythe du refus (1), is a historical investigation, delving into the heart of this epidemic to understand why it happened and how it spread, especially now that there is major discussion about the “re-emergence” of this infectious and highly contagious disease with growing anti-vaccination sentiment.

Why did my book examine the 1989 measles epidemic in Quebec in particular? Because this event took place ten years before the Wakefield scandal in 1998. This is not to say that vaccination refusal or vaccine hesitancy did not exist at the time of the 1989 outbreak. Instead, looking at the history of measles before 1998 means considering the possibility that this viral disease and its prevention have not always been sacrificed on the altar of anti-scientific skepticism, postmodern individualism, and social media. Looking back lets us reflect on other factors and reasons why measles outbreaks still happen.

As a medical historian accustomed to analyzing and cross-referencing a large variety of documentation and data from the past, I established that the 1989 measles epidemic hit the province unevenly (Table 1), affecting all ages, but mostly adolescents (70% of cases), of whom a majority – up to 80% – had been vaccinated against the disease. This demonstrates that the vaccines used up until the 1970s and the vaccine schedules that were followed (these teenagers had been vaccinated with one dose only; the two-dose schedule was not be implemented until 1996), were not necessarily optimal. That said, at the beginning of the 1980s, measles vaccination rates in Quebec varied between 40% and 90%, depending on the region and city. 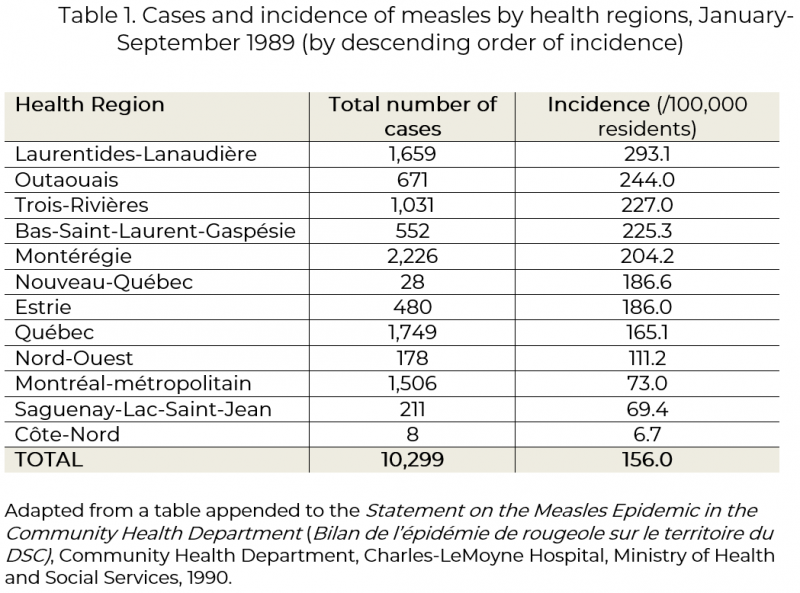 The variations in vaccination rates and incidence of measles in Quebec in 1989, and the fact that other Canadian provinces were not hit – or at least not hit as hard, as in the case of Ontario – led me to take a closer look at the immunization policies at both the federal and provincial levels, dating back to the 1960s and the introduction of the first measles vaccine in Canada.

With respect to immunization, Ottawa’s limited responsibility involved ensuring the quality of the vaccine products used, offering the provinces a chance to buy the vaccines in bulk, and providing “guidance” on vaccination schedules (2) – hence the Canadian “vaccine patchwork” still in place today (3). With the introduction of Medicare in 1970, public health in Quebec was part of a system that did not adequately fund vaccinations and led public health officials to prioritize one vaccine over another in order to deliver a universal vaccination program. This was the case with the rubella vaccine before the widespread use of MMR (measles, mumps, rubella) vaccine use in 1977. In 1973, the number of vaccinations against rubella was twice as high as the number of vaccinations against measles in the province. Some general practitioners and pediatricians also thought that preventing rubella was “more important” than avoiding measles. Despite the existence of a universal measles immunization program from 1970, the measles vaccine was not necessarily accessible in Quebec at the time: many vaccination clinics and clinicians did not provide it free of charge or on a regular basis.

In the 1970s, Local Community Health Centres (or Centres locaux de santé communautaire, CLSC) were looking to establish their identity within Medicare. By relying on frontline interventions aimed at the social determinants of health, influenced by the Lalonde Report (4), some CLSCs reinforced accessibility barriers to immunization. To the CLSCs, vaccinating children was not necessarily a priority. Critiques of these new health structures – with which reviewers were not familiar with – in the 1970s and 1980s echoed misunderstandings or hesitancies regarding the importance of mass immunization or the importance of a vaccine in particular, notably those from a minority of activists (parents, physicians, alternative therapists) who were advocating for “medical freedom” and care options outside of biomedicine. In late 1976, the Parti Québécois rose to power for the first time, just as the “swine flu” crisis was unfolding (5). At that time, some nationalists, including chiropractors, naturopaths, and people from the local cultural scene, promoted the idea of a “new man” ‒ one who avoided pharmaceuticals, as they were thought to be toxic. Some of them joined women in their fight for medical choice, against over-medicalization, and for the recognition of midwifery. It was also under these conditions that measles seemed to be less problematic than the biotechnology, the vaccine that was supposed to protect against it. Rhetoric on the necessity of eradicating the infectious disease – a dangerous disease because of its complications, costly in terms of hospital stays, days off work and school days (6), composed by North American epidemiologists and the American pharmaceutical industry – was therefore poorly received by parents.

The 1989 measles epidemic in Quebec was the product of political, economic, sociocultural and scientific factors at the provincial, national, and international levels. But we should not forget that measles is a highly contagious disease – probably the most contagious of all infectious diseases – and therefore requires near-perfect vaccination rates, with a two-dose protocol (7). Between 1988 and 1991, even though measles did not spread to the rest of Canada, there was a strong resurgence of measles in different parts of the world, from Hong Kong to Mexico and passing through Czechoslovakia. The 1988-1991 “hidden pandemic” acts as a measurement of not only of an imperfect public health service at the local level, but also, a measure of an increasing globalization of humans and pathogens.

Vaccinations. Le mythe du refus, addresses epidemiologists, paediatricians, vaccinologists and policymakers in public health and urges them to remember that science is profoundly political and intimately social. The book also wishes to convince its readers not to confuse vaccination (such as receiving a vaccine) with immunization (such as being fully protected) and vaccination refusal with non-vaccination. These frequent, pervasive assimilations are the result of “post-Wakefield” representations contained in a “broad narrative about vaccines” (8) that tends to pollute a healthy debate, which has become less and less constructive. There is no such thing as a “good” universal science on one side, and “bad” parents on the other. On the contrary, there is a virus that does not necessarily respond to scientific efforts or adjust well to random political decisions and poorly-funded budgets – a virus that illustrates the shifting collective representations of the disease, of prevention, and of risk. In these contexts, “the myth of refusal” is defined in the book as a coherent and cohesive narrative that seeks to denounce “anti-vaxers” and to re-convince people of the benefits of vaccination. This narrative appears to be problematic and even damaging in its attempt to promote vaccination, as it leaves out many reasons why non-vaccinations, and incomplete immunizations, occur and lead to epidemics.

The 1989 measles epidemic in Quebec was not an accident of history, any more than the epidemics hitting Ukraine, the Democratic Republic of the Congo, New Zealand, the Philippines, and the United States since 2017-2018. It would be worth subjecting other epidemics to investigations similar to ours – not just because the past tends to repeat itself, but because we can all learn from the past, for the sake of a responsive, equitable, and efficient public health care system.